Notes about programming tasks that took too long. By Patrik Duditš.

In previous post we managed to run Payara on Kubernetes. This is of course bit dull without applications deployed. Next we will create an actual aplication, that will deploy with official Payara container. We will use the full profile Payara, just to demonstrate, that microservices can be built using standard distribution.

Let’s see what we will need to have our app in Kubernetes as well:

Given my hobby environment (Windows 10 Home), I cannot use the current Docker for Windows installation — remember, there’s no HyperV in Home edition. We need to install Docker Toolbox, its retired ancestor.

Kubernetes gives you solution to that, called Sidecar containers. Instead of running single image, you put multiple images together, and they can speak to each other via localhost, or share directories.

So we will take Official Payara Docker Image, mount its autodeploy directory, and for our app we will build an image based on busybox, that will just copy our .war file to that folder. 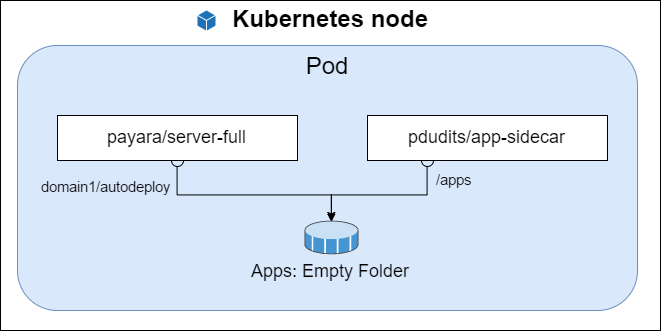 The app-sidecar will be based on busybox, adding just 1MB of binaries to our app package.

One doesn’t need to leave its trusted tools for this fancy new tech! Everything you need to do concerning Docker images and Kubernetes you can achieve with Fabric8 Maven Plugin. Fabric8 is entire CI/CD pipeline for Kubernetes, and I will surely look into it in next posts — first, I need to understand what am I doing before I let magical tools do that for me ;).

The goal build of Fabric8 plugin constructs the Docker image based on image configuration. So this is what the interesting parts of pom.xml look like:

To actually run the build you need to have Docker environment configured, as the plugin will call out to Docker. Minikube has this nice feature, that it will reuse Docker daemon from within minikube VM. You therefore doesn’t need to run another VM, just make sure to follow instructions of minikube docker-env before invoking maven:

That also means, that whatever you build is immediately available for deployment into your Kubernetes cluster.

fabric8:resource will take YAML files that serve as templates for resource descriptors, add some useful labels to them, and attaches them as build results.

For our sidecar we will create a Deployment. It is a declaration of what Pod should look like with added features like replication — more than one instances of same pod — and rolling upgrade. Especially the rolling upgrade is interesting for us. When you upgrade your app, a new Pod will be created, and when it starts successfully, the trafic will be directed to it, and after that the old pod is stopped.

So let’s see the file:

Another resource desciptor we’ll add will describe a service. This will give a set of pods that offer same service a common, load balanced IP address inside the cluster, and may expose it to outside world.

In our minikube, it will expose the port of the VM. In the cloud it will integrate with provider’s load balancers.

The service exposes port 8080 (the http port) as port 8080 of the service API. The calls will be directed to pods, that have label run equal to payara. And to expose it to outside world, we will use a port of the node Kubernetes runs on — the minikube VM in our case.

Deploying to the cluster

Now that we have run our mvn clean install, we’ll have our docker image pushed, and our resources created.

Next we’ll deploy with mvn fabric8:deploy.

Our .war that were deploying to Payara now deploys to docker container with payara server inside Kubernetes!

Will open browser with the app. You need to add /payara-sidecar to the path.

Look what this does: 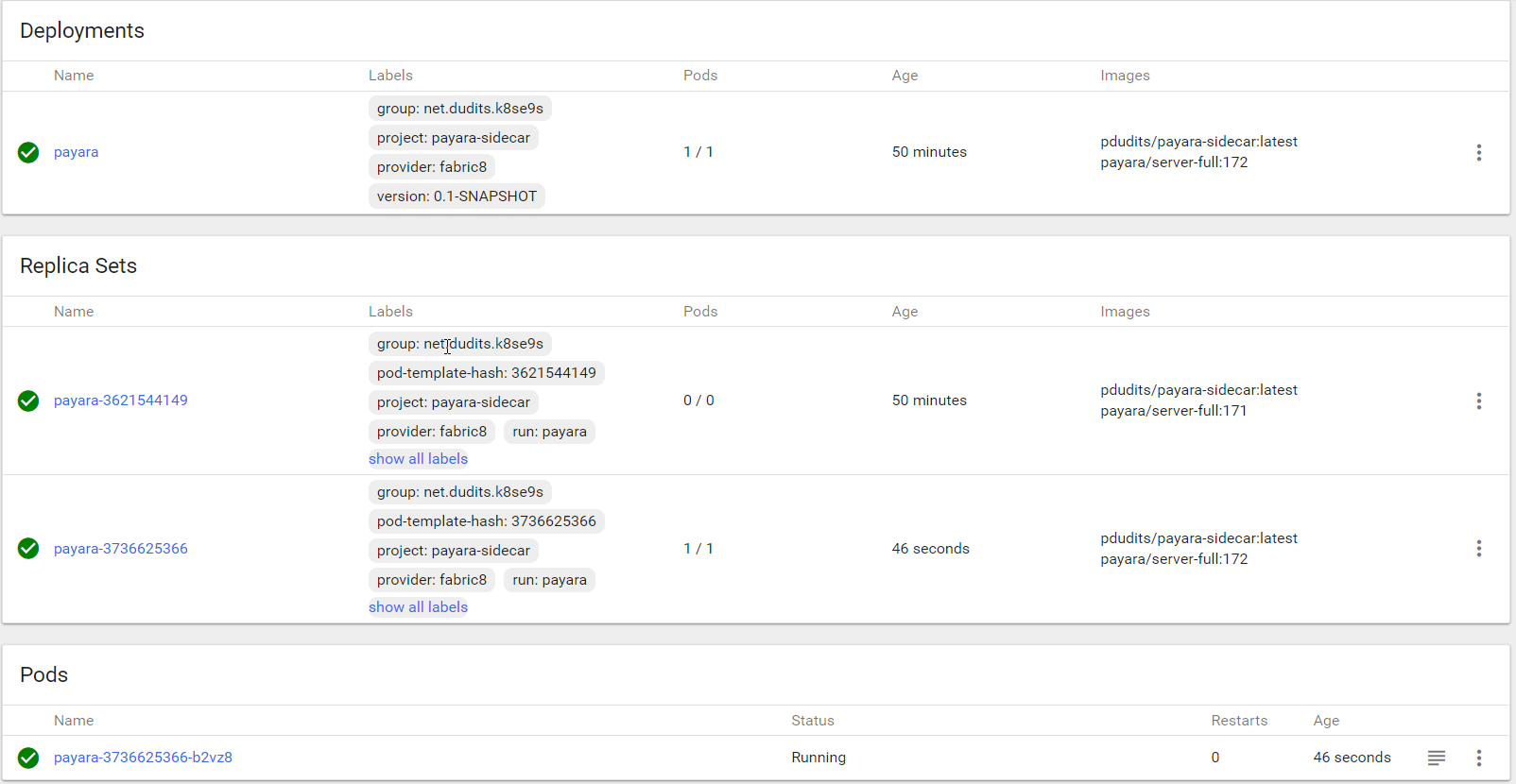 New pod was started with newer version of application server, and after it started, the old one was removed.